Feathering is a great option that enables spreading an effect over the boundaries of a selection it's applied to, with a "configurable" fall-off.

Currently GIMP allows adding feathering to a selection by taking user-contributed amount in pixels. However GIMP doesn't allow tweaking existing feathering value directly, nor does it provide any visual cue as to how far the feathering stretches. This increases the amount of trial-and-error during e.g. processing feathered selections with filters.

What should be available

It should be possible to visually tweak the amount of feathering on the canvas. Visual cue for feathering, however, should not get in the way of user's interaction with GIMP.

It should be possible to use numeric input for controlling the amount of feathering. Input field should be discoverable, but it should not get in the way of user's interaction with GIMP.

Jane needs to apply a blur effect that would spread somewhat over the boundaries of a selection. Jane is a visual kind of person, she typically relies on visual control and gradual refinement with immediate feedback/rendering rather than on numeric input and absolute values. She isn't sure at which point exactly the gradual fall-off of the effect would stop, so she's adding some initial feathering to a selection, opens a blur effect dialog with on-canvas preview enabled, then tweaks the fathering radius on-canvas and the amount of blur until she's fine with what she sees.

Visual editing of the feathering amount

Once selection made with a tool is confirmed (pressing the Enter key), there would be a small knot on the upper boundary of the marching ants that indicates the selection. 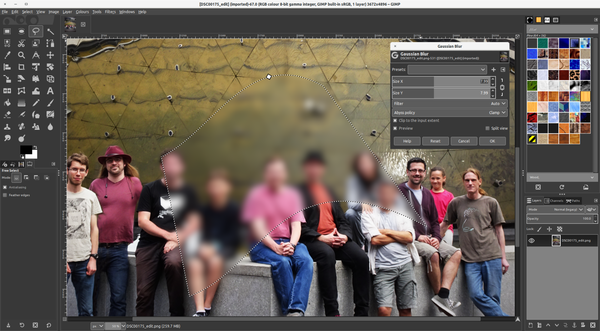 The user can drag the knot away from the selection marquee to expand the feather effect, which will automatically expand inwards and outwards at the same time (equal distance). The end of the feather effect is shown by the red and blue outlines. There is a knot for each which the user can then drag independently of each-other to adjust where the effect starts and ends. 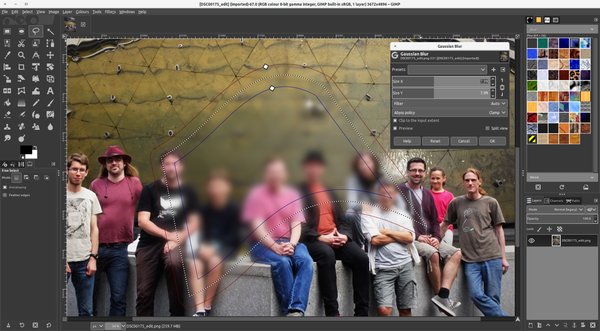 The visual cue should generally repeat the existing selection cue, honoring non-uniform feathering by expanding or contracting respective areas of the visual cue.

One possible rendering implementation is a thin dashed line.

The visual cue should have at least one on-canvas control for expanding/contracting the feathered area.

TODO: supposing, a user sees only a part of a selection in the viewport. how many controls per feathered area should GIMP render? what would be the placement logic?

TODO: do we render the control on top of the feathering cue?

After the initial click-drag, the user can move the knots independently to affect the blur. Furthermore, double-clicking anywhere on either path adds two more knots (one on red, and one on blue effect boundary lines), thus making handles wherever the user wants to modify the filter feathering edge. 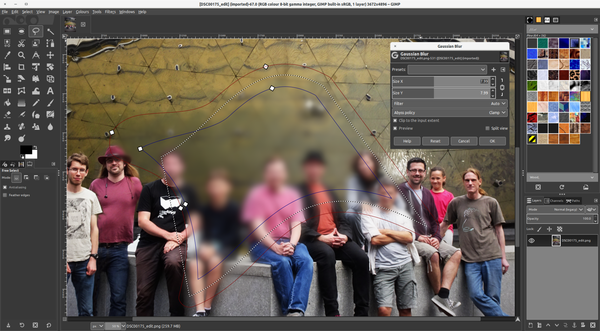 The numeric input in the tools' options dockable dialog kinda works for creating a new selection. However, starting with 2.9/2.10 it would fail miserably as soon as the user opens a filter dialog, because the dockable dialog starts showing just the color picker radius control. Something needs to be done here.

Non-uniform feathering happens when one uses e.g. a quick mask and a brush of different size and/or hardness value. Here is how this should be handled:

TODO: 'Select -> Remove feathering' is a sensible menu command, however an on-canvas option could be designed.

darktable has feathered masks and calls it 'gradual decay' in the docs: https://www.darktable.org/usermanual/ch03s02s07.html.php